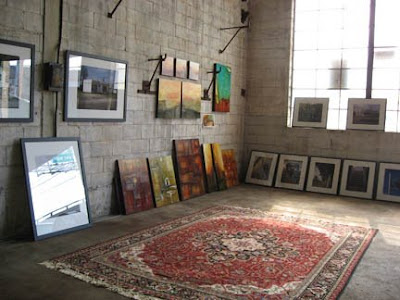 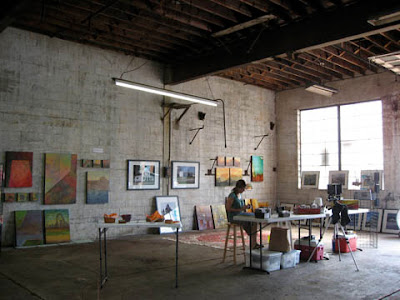 It was beastly hot.  I never actually heard the final temperature, but let's say near 100?  The media kept talking about heat warnings, don't go out of the house, blahblahblah.
But what did I do???
Well, I went to my Open Studio of course, in the alternative space provided by the Contemporary Art Museum (for those of us who have studios outside the city limits).  It was a very raw undeveloped space and I would love to have my real studio there......oh those perfect high ceilings....but alas, no air conditioning.  There were a couple large fans, luckily one was right near us.
The first pic shows "my" corner and the second pic shows how the 3 of us(me, Heather, Greg) staged the entire space(that's Heather sitting at the table).  We, (Heather and I) gave Greg part of our walls because his space was in the middle and would have required him to bring walls, which would have been a total pain.  And we're just so nice we helped him out.  We even did all the drilling into those masonry walls for him because he had an opening over in KC and wasn't around during set up (which was a total horrendous pain in the rear, set up that is, not Greg's opening, but that's a story for another day).  Suffice to say I am not so swift with power tools.  Thank God for Heather.
Anyhoo, Greg kept joking that we were "his bitches" doing his set up.  But he owes us big time now and Heather said it best, "he is our bitch now."
Despite the heat, it was fun.  Yes, it really was.  We had beer.  We had margaritas for MB cause I'm not a beer drinker.  Pizza from Imo's.  Good tunes. And good friends.  We talked to folks, made connections with other artists, and just had fun.  Crazy I know. We tore down and had everything back in the vehicles in 37 minutes flat.  I nearly passed out in the back of the truck (under the camper shell) while trying to arrange stuff but nothing that some Gatoraid couldn't fix.
The "after party" was a Bar-b-q at the museum.  And that was also a surprisingly good time which I only say because my butt was soooo dragging, I felt like I was wearing wet clothing (hmmm, probably because I was) and all I really wanted was a nice shower.  But I digress.  I "freshened up" in the ladies room, where I practically bathed in the sink and snuck my undies into my purse, tee, hee.  Ok, yeah, tmi, but I instantly felt better.  So I enjoyed catching up with lots of my artist friends and even meeting some collectors who attended the show.  We stayed a lot longer than I would have guessed, but then Heather & I left, flew home, I dropped her off, I finally made it into the shower and I swear I was sound asleep by 9:30pm.
See that green painting of mine, 2nd from the left. leaning on the wall?  It's gone.  Sold to the most lovely couple, it now has the perfect home.
And oh yeah, someone tried to buy my rug.
!!!!
Posted by MB Shaw at 8:22 AM