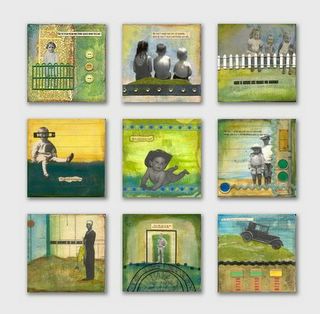 Chicken Little does a U-turn

I had a brilliant day with my friend Claire today. We started out at an Estate Sale organized by a friend of mine. It was held in an old church that will apparently be renovated into a home. The church was a large property in a very cool urban setting and I know it is going to be fantastic, one of those places you just wish you had the balls to buy but of course I am currently playing it safe in the suburbs, how boring is that!?!? Anyway the Sale was fun and I found many interesting items including some terrific ledger pages and composition books. No photos though which was a bummer, but ok as that is what I am hoping to find in Chicago.

After the estate sale, we planned on having breakfast but ran into some road detours (and I wouldn't make a U-turn) when I remembered that I need to go to Gringo Jones so I could get some more Mexican blankets for Yoga. And since we were in the area, well, you know how that goes, we just had to stop. Now this is the greatest kitschy import store and I was trying to exercise a little bit of restraint even though I wanted to buy tons of things. Couldn't resist a little beaded purse though and I believe Claire got one too in a different style from mine. Plus I got my blankets which were a great price.

3rd stop was brunch at La Dolce Via Cafe, a little place only Claire would know about, how she knows all this stuff I will never understand. But it's a bakery turned restaurant with sidewalk dining which was glorious since it was a lovely day here. They had amazing delectable scones filled with fresh blueberries and I had a Chai Latte plus an omelette that was just all right, not great.

After eating we headed out to Webster Groves to see a couple of our friends, Nancy and Kris, who were in a little show over there at the Y. We bought a few items including the Tupperware tumblers I have been searching for; they have apparently come back as "retro" which is scary as I still have one of two in my cupboard(am I aging myself here?). Then over to Ben Franklin's then to Whole Foods. After we left Whole Foods I chose to finally pull the U-turn. Right there on Brentwood, in the midst of at least six lanes of traffic? Backed up of course, at least the way we were headed, but totally clear the other way and Claire knew a shortcut plus she was egging me on.

My little Saab did not fail me, just turned on a dime it did, no arrests resulted or anything. And Claire was so proud.
Posted by MB Shaw at 11:19 PM 3 comments:

The Day I changed Blogs 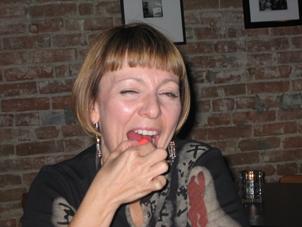 I've been doing that Xanga thing for awhile and it was fine. But I felt like I really wanted to have my own spot, gee wonder why they call it blogspot. Plus I didn't like the fact that non-Xanga members couldn't comment easily.

Here's my history if you care to back track.
http://www.xanga.com/home.aspx?user=mbshaw

And yes, that's an Atomic Fireball in my mouth.
Posted by MB Shaw at 4:41 PM 1 comment: