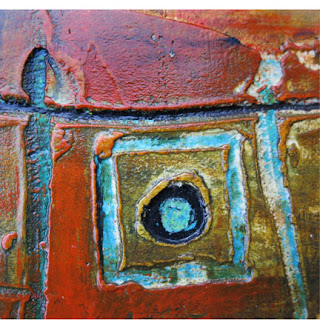 On June 1st I will be doing a free Webinar about Texture.
Yep, totally free. I have lost my mind.
It is sponsored by Create Mixed Media  and you will need to head over to their site to sign up. But don't go yet.....I need to tell you the two reasons you reallyreallyreally want to sign up:
Say what, you want to sign up????
Well do.not.delay.
Click here
or here
or here
See you there!!
Posted by MB Shaw at 9:39 AM 7 comments:

I worked in the studio all day using my newly created pattern paper for the first layer collage.

It pieced together beautifully and created exactly the subtle look I imagined.
After sending a photo update to my client, it was determined that I had taken some artistic liberties they had not expected. With their logo. It seemed minimal to me but the client knows best.

Back to Square One.
Not to the micro brewery next to my studio (yep, it is called Square One - and believe me, I did think about going there) but to the drawing board.
It ain't always pretty.

(In case you are wondering, yes, I am second guessing the merits of featuring this play by play on my blog. But In for a dime, etc.....hoping perhaps this is interesting to you guys? And also testing how many colloquialisms I can use in one Blog entry. I am perhaps a teeny bit slap happy. Ahem.)

How to start a Commission

I promised that you could follow along on the Take a Seat Project. And right about now you are probably thinking, what the heck, I thought she was going to be painting and doing some collage, not working on a computer.
Uh, yeah......but fact is, there is a lot of pre-work that I do before I ever pick up a brush. Sometimes it seems like the art is the quickest part of the process.
For instance, once I learned I had 'won' the commission (and I say won because I was in competition with other artists) I started to formulate plans. Mainly I did a lot of thinking.
I made notes.
Sketched out ideas.
And then set up a meeting with the client.
During the meeting I asked a lot of questions and took notes. I showed my initial idea and asked for images from the client.
Obtained research material regarding the COW projects which were also fiberglass. Ordered materials that I needed. Cost - close to $400, yikes!
While I was waiting for the photos from the client, I completed all the things that were 'on my plate' so I could dedicate full effort toward the commission.
Flash Forward - materials arrived - photos and art materials.
I reviewed and then took more time to think.
Lots of thinking.
Scratched my entire proposal.

Developed a new idea and called the client to discuss.
Turns out my new idea involved imagery that was part of a letterpress job a local artist had done for client. I really wanted to use these images in my collage, but refused to do it unless we had permission. Client called and then I also called to obtain permission. The other artist, Eric Woods, was actually pleased that I asked and generously agreed, woo hoo! Naturally I will give him credit.
As an aside, you should check out his company, Firecracker Press here. They do amazing work.

I drove over to client's office and picked up Eric's original posters to use for collage.
Went through all the photos furnished by client.
Again.
Cropped madly and then (using a book) taught myself how to create 'fabric' with a half drop repeat. Using the clients materials this allowed me to create a custom pattern.
Sent it out for printing. Translation, honey would you have these printed for me.....
Re-contacted client to obtain a higher res version of another piece that client wanted to play an integral role in the collage.
Awaiting its arrival.
Called the company that does the Clear Coat (this is the final step) and made an appointment for next week. Nothing like a deadline to keep me on track.

Took the posters (on very thick paper) into the studio and experimented with ways to separate the paper layers so they are thinner and will collage more seamlessly. Decided that using a palette knife was the best (although quite messy) way to do this.
Started to play with my palette to see if I could match the orange Logo color.
Hmmm, day one over, I haven't even touched that chair.
Posted by MB Shaw at 7:23 AM 5 comments:


Remember back in January when I was working on table decorations for Chesterfield Art's fundraiser? If you recall, we constructed and painted about 50 chairs, oh my oh my it was fun but also a lot of work. Well now the Take a Seat Public Art Project has been fully launched and full size chairs have been painted by lots of school groups. I have been commissioned by PNC bank to paint a chair that will reside in their local headquarters. I mentioned that you, my loyal blog readers will be able to follow along with my process, so here are my very first photos. 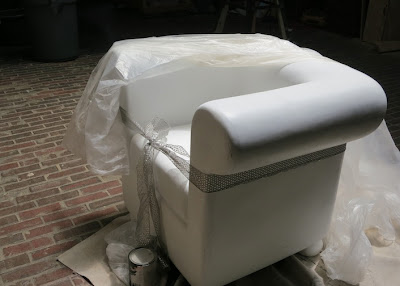 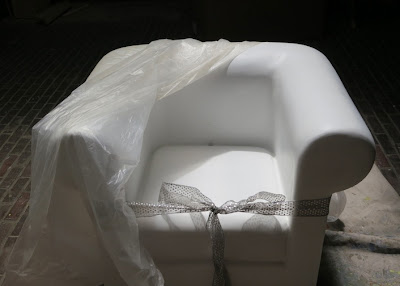 This is a life size Fiberglass chair. I have plans for a mixed media collage painting using photos and documents I have obtained from my client. I will keep you updated as it progresses.
Posted by MB Shaw at 3:08 PM 6 comments:

We took a trip to Texas last week and I am still slightly derailed. While hiking with my brother and his family I saw this hole and perhaps inadvertently slipped into it......ahem.

Seriously though, I have a lot going on right now. Good and exciting and all that great stuff but

I. Am.Busy.
Which makes me a bad blogger
Next week I am starting a rather large commission and I will document my process here. Hopefully you will find it interesting.
And, in kitty news, my little girl, Lyra has grown up!
Check out this picture of her fluffiness and mane!!! Remy hasn't gotten his yet. I will keep you informed.
Isn't Lyra cute though? Or maybe that's just a mama talking.

Wax on, Wax off Batik

Day one of the workshop at Valley Ridge consisted of making Batik papers. This is one of my favorite things, originally taught to me by Katherine Engen and then she encouraged me to take the class and run with it. Isn't that cool of her?
Well, I guess I did. I do know I have come up with some crazy ideas for printing on paper - can you say potato masher? Yeah, crazy I know.
Here is some student work. Absolutely gorgeous.

Put a Bird on it (cause we LOVE birds!)

The adorable Tracie Lyn Huskamp has a tutorial up on her blog that uses her new line of Bird stencils. Sold at StencilGirl of course but you probably figured that out.
Happy May Day!!!