An Interview with Moi!

Jane LaFazio is featuring me over on her blog, an interview she conducted recently. So nice of her to take the time; she is a true sweetie. HERE is the link.
Posted by MB Shaw at 8:58 AM 1 comment:

They say that lightning never strikes the same place twice. In my case that isn't exactly true. But I am getting ahead of myself.
I have never talked about this in a public forum however the events of Friday sort of cracked me open. It occurred to me that I know a thing or two about grief.

In 1989 I was married to another man, not Mr. StencilGirl John, the rock and foundation and love of my life guy, but another guy with whom I had my first and only child, a beautiful boy we named Nathaniel. He was born early and eager with some physical problems, things that we didn't think would  manifest into anything that serious. He ended up with developmental delays, but once again, we remained optimistic, simply redefining normal for ourselves.

In 1991 a heart defect was found, how it had been missed earlier I simply don't know. My son - happy, playful and engaging - needed surgery to save his life. We located the best surgeon we could find, set the date and proceeded. The surgery went off without a hitch, or so we thought. Yet Nathan didn't bounce back as expected. Over the 24 hour period following surgery I watched him deteriorate into a non-responsive state. The moment of his death I was holding his hand. He had just opened his baby blues for the first time, looking right at me and I thought.......well, you know what I thought, but then......nothing.

Flash forward. John and I married. We were so very very happy. I reveled in my role as step mother to his son and daughter. His daughter a person I would have chosen as a daughter. Same with his son, such a smart young adult, we were certain he was a genius he was so darn clever. In and out of college and the army, with deployments to Desert Storm and Haiti, he had been through a lot and seen things he shouldn't have seen. Add this to his naturally supercharged intensity and we worried about him. We made sure he got the therapy and medication that he needed. We believed that one day he would emerge a stronger healthier person who would be able to share his myriad talents with the world.

Thanksgiving Day 1997 was a big event, my family and John's family together at last, a culmination of my dreams. Michael didn't show up; we were bummed that he missed the frivolity of the day. Call it intuition or whatever you want, but that evening I felt something deep inside and I.Just.Knew.
John found him in his apartment, shot through the mouth by his own hand. He had just bought milk and apples, receipt still on the counter.

What is the purpose of my story?
I guess I want to help people know what to do with people who grieve the death of a child. Before these things happened to me, I never knew what to do and felt incredibly awkward around any grieving person, let alone one who had lost a child. I never wanted to intrude and do or say the wrong thing, consequently I often did nothing.
Here is my advice.

Grieving people need to be surrounded by loved ones. They need to be left alone. They need to cuddle. They need to run and hide.
Yes, all contradictions.
But, here's the thing - in the immediate aftermath, emotions splay out absolutely uncontrolled. You simply have no idea how you might feel from one moment to the next. Hysterical, numb, controlled, angry, defiant, calm. Switch the order. Repeat often.

Terri Stegmiller is another one of our new designers over at StencilGirl Products. I really like her design aesthetic - clean and crisp,  yet funky and modern and somehow nature inspired. Her stencils rock. And her art quilts are really amazing. Is this bird not the cutest ever!?!?
If you pop on over to her site she has a free video about her fabric painting process. I found it quite interesting, she uses a product that I had never seen before which means I need to find it even though I have never made an art quilt in my life. But you know how that goes.....geez....
And you can find her stencils HERE.
Posted by MB Shaw at 10:24 AM 3 comments:

I met Jessica Sporn at Art is You in Stamford, CT last year. She asked me about stencils, one of my favorite topics. I found her to be utterly delightful and am thrilled to announce she has been designing stencils for StencilGirl. Today she is launching a 'Stencil Test Drive' of all her new line starting out with the Hebrew stencil, which is a gorgeous depiction of the Hebrew language. This is what the Hebrew text means, which I lovelovelove:

May God bless you and keep you
May God cause the divine light to shine upon you and be gracious to you
May God turn toward you, and grant you peace
(Numbers 6: 24-26) 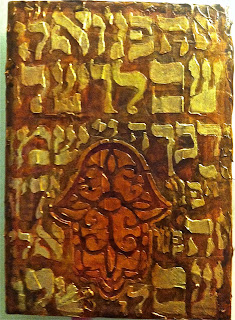 If you head on over to Jessica's BLOG you can see her tutorials plus link other people on the Blog Hop TEST DRIVE! Lots of great ideas and, pssssst, there is a contest too.
Posted by MB Shaw at 11:30 AM 2 comments: