The mirrors have been 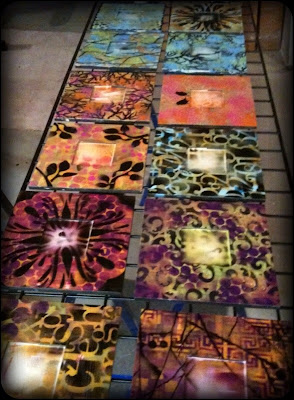 a hit at my recent shows. Thus I spent today working on a batch I previously texturized (I don't think that is a real word, but I bet you all know what I mean). They are not quite finished and the mirror part is still taped up but I think you get the idea.

In other news, the iPhone continues to amaze me. John and I are like kids with new toys. We have loaded a bunch of apps, most free, but some had a small price. He loaded a weather app that shows a TV style update of the current weather. That's not really my thing of course (I am more a 'weather out the window gal') but instead I've loaded camera stuff, Facebook, a doodle app, and Bejeweled. Plus a level which is useful.

I am trying to use my thumbs on the keyboard as I heard that is the 'cool way'. Apparently use of your index fingers immediately tags you as older, translation, not hip. A dork of sorts. I've lived the majority of my life as a dork, so its really no biggie for me, but I have found that thumbs are oddly efficient.
Posted by MB Shaw at 6:00 AM