Yeesh, I was running and running all day long today. One errand led to another to another and before I knew it my day was gone.

I am supposed to be making smaller inexpensive products for the holiday but I've been struck indecisive. I hate it when I do this. It's not really indecisive per se, but a case where I have so many ideas that my brain is spinning out of control thus I can't pick a direction.

Bottom line, I was lacking supplies (yes, hard to believe) so I headed to Dick Blick to pick up a couple of things. Of course that meant I would be near Whole Foods. Which meant I had to get olives....the ones stuffed with Gorgonzola cheese...the ones I buy only 4 at a time because they are a little on the pricey side...the ones they keep behind the counter. About $1.50 buys enough for 2 martinis which is a nice little treat.

On the way home I popped into the mall to shop for John's birthday next week. I can't write about what I bought because he might be reading. I did not get it at Macy's though due to an idiot salesman named Jay. Good grief that guy is overzealous; he just drove me nuts, or in this case, he drove me right out of the store.

While at the mall, I stopped in Williams Sonoma for risotto and finally broke down and bought this darling little espresso maker I have lusted after. It replaces my old broken lid model that has lasted for years. I also bought some coffee there, Illy, a brand I had never tried before, the fine ground dark roast Espresso. 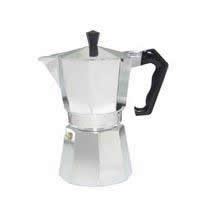 I had to hurry home to brew up afternoon lattes for me and John which was so civilized I fear I may have started a new habit. They were absolutely divine if I do say so myself, rivaling those from any coffee shop. If you have never tried one of these stove top coffee makers, they are the best. In fact I own a fancy schmancy one but I honestly prefer the stove top model.
Posted by MB Shaw at 10:21 PM