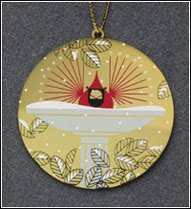 Growing up in Cincinnati, OH, the work of Charley Harper surrounded me. We lived next to Winton Woods and spent lots of time there as kids; all the park signage was designed by Charley Harper. He lived one suburb over from us. My mom worked part time at her friend's shop - they carried his work and frequently saw he and his wife Edie. As far as I knew, they were 'just' local artists. Little did I know, huh?

Anyhoo, I loved his spare style way back then, when I was too young to get how good it was (and still is). As a teen, I cursed my way through my one and only cross stitch effort, Fishful Thinking, by Edie (see below). To this day it hangs in my parent's living room, more a testament to Edie's keen design than my needle work, ha!

Anyhoo, these days I enjoy collecting any type of Charley Harper item, Christmas ornaments for sure and I was thrilled to add Brrrrrdbath to my tree (see above). I also got the book, Charles Harper's Birds and Words, a recently re-issued book of Harper's own commentary regarding the birds that he drew. It is a gem that every Harper fan should own. Not only does it have so many of his pieces, it is chock full of his humor, just delightful! And I got a Charley Coffee mug which I will use at the store. Nice haul, huh?

If you are unfamiliar with his work, check it out here. Very cool stuff, realistic yet with clean lines and a graphic design aesthetic. I adore it. 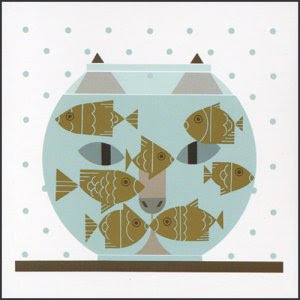 Speaking of stuff I love.....
Last night I attended a party with some arty friends. We do a gift exchange and I decided to assemble a group of my own 'favorite things' a la Oprah. Clever me had assembled a few small items that included a Cavallini Notebook, birds of course, indeed one of my favorite things. It was well received by the group then we moved to the next gift, also a Cavallini Notebook plus a tin of Postcards; the next gift was a Calendar; the next another Notebook. It was absolutely hilarious. Like minded souls I suppose.