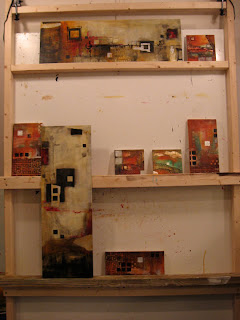 Here is an easel shot which shows some work in progress. The two bigger pieces are claybords and the smaller ones are canvasses. Obviously not finished in this shot, I have since finished several of them and I will hopefully share them tomorrow (which I guess is today since I am up so late).

This is a nice close up of my easel (my own design) which John built for me. It leans against the wall and offers several heights for painting while standing or sitting. I use it for "viewing" too because I move my work around quite a bit and often will paint the pieces while they are on the table or on the floor.

And how 'bout this other shot, where Jasper Johns is inspecting my progress (and oh, don't I wish the real Jasper Johns was hanging out in my studio with me). I am so not used to a cat walking on my art tables as my older kitties pretty much know the drill. Jasper, on the other hand, is such a kitten. And I am apparently a soft touch since I grabbed a camera rather than that handy spray bottle that was sitting right there. The other day he climbed all the way up the easel, using the ledges as steps, and then embedded his claws in the top in order to hoist himself up to the window sill. Ahem..... 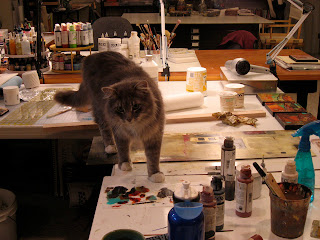