More tales from the road

Yes Virginia, there really is an outlet store for tobacco products. I saw it with my own eyes in Paducah, Kentucky. Too bad I don’t smoke.

And Burger King (don’t ask what we were even doing in a Burger King, my tummy later reminded me of why I don't normally eat there) has this new special item on their menu…….Chicken fries. Like fries don’t have enough fat grams, they are now breading them before frying. A la Chicken Fried Steak, which doesn’t involve chicken, neither do these fries.

We also stopped at Hancock’s of Paducah. Anyone who is a quilter knows this is kind of like Fabric Central or Mecca for quilting. I have always wanted to go there. Not that I quilt. Heck, I barely even operate my sewing machine for the most minor tasks. But I like fabric and sometimes use little pieces in my collages.

We were making excellent time on the return trip so I asked John if we could stop and he indulged me. I should have known something was going on when we pulled in and the parking lot was absolutely filled with cars. There was a huge sign on the front of the store that said NO Men’s restrooms inside store…..men were advised to use the Porta-Johns in the parking lot. To which my John rolled his eyes.

Anyway I ventured in to find throngs of women as if a tour bus had dropped them off. I soon found out that Hancock’s was having some kind of once in a lifetime event where they open their back warehouse to sell end bolt pieces for only $4.98 a yard. My first clue was the signage about where to form the line, the # of people admitted at a time due to Fire code, etc. Apparently the American Quilt Society show was due to open (in Paducah) and quilters from all over the country were in town a day early just for this sale, that's how big it is. 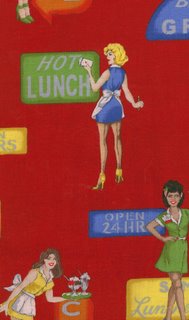 To say I was out of my league would be a serious
understatement. I mean folks simply grabbing fabric left and right, stacking their carts high with more fabric than you could imagine.

I can’t convey the huge selection offered between the store itself and the warehouse. It was overwhelming. Pile after pile after pile of these small end pieces. So little time. It would have taken forever to go through everything thoroughly. And I did want to get home and see my kitties. I quickly perused several aisles and was able to score some very kitschy prints. I have no idea what I am going to do with them. Perhaps collage parts from one or two.

But I reallyreallyreally would love to have a blouse out of this one. I am hopeful I can perhaps sew up something cute.
Posted by MB Shaw at 10:09 PM