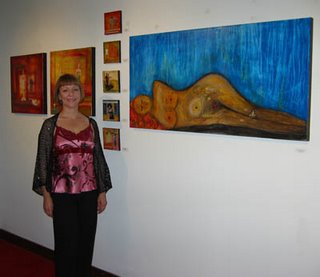 Well, here we are (me and Rhonda) at the party last night. I am wearing the same outfit I wore to Artfeast as it is comfy and I was feeling way too bloated to wear anything snug. Rhonda was casual as always (I don't think she even owns a dress) but some of the artists were really dolled up and gorgeous. It was 92 degrees outside yesterday or at least that's what the car said as I drove to the show. In April.

Rhonda's art is clay. People usually think it is wood. I love the earthy textures and color. John and I bought a piece from her last year which is in our foyer. 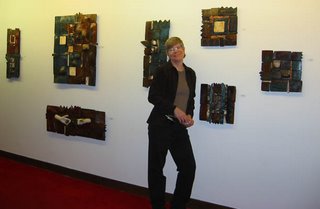 This is about half of my wall. The other half is another row of the 6x6's and then a grouping of 12x12's. I sold 3 pieces last night. Met some great folks, had a lot of fun and snagged some MAC lipstick from a leftover gift bag which made my evening.

There were twin ice sculptures of Ketel One bottles, with this luge type thing frozen into the center. You put your martini glass at the bottom and they poured into the top so you could watch your drink as it slalomed (yes, I know that's not a word) its way down to your glass. Very fun, a totally sophisticated beer bong.

There is also a performance piece.....I suppose that is what its called.......a woman who stands in this mirrored area, slightly concealed by curtained walls. She is totally naked and sleek, completely shaved with a pierced labia as her only ornamentation. "Nekkid" we were saying, like blushing little school girls. She is a beautiful large woman, comfortable in her skin (that is a phrase on one of my collages) and stands completely still as people walk around her. She won't talk but her eyes follow your movement. I wasn't watching her all night as she is in another room, but I assume she stood there the entire time and I honestly don't know how she did it. I could not have stood naked before a group of people for 1 minute let alone an entire evening. I feel like I need to learn something from this; if only I could glean a fraction of her strong sense of self and confidence in her body. This might take awhile though, yeesh, I'm 45 and still saying "nekkid."
Posted by MB Shaw at 7:42 AM