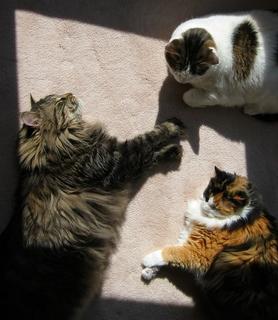 We are a 3 cat family. Merlin is the huge Maine Coon cat, Gilligan is the white one - he only has one eye, the result of an unfortunate drive by cat shooting, and Isadora is the Rubinesque Calico. I adopted Gil and Izzy(brother and sister) when I was going through my second divorce. Husband #2 and I had dogs which I love too, but I had always wanted a cat and he didn't. These two were my "treat" to myself and I love them dearly for being such great companions to me at a tough time in my life. They had been abandoned by their cat mother and raised by people, so they are extremely social and act a lot like dogs, run to the door to greet you, respond when you are talking, that sort of thing. John and I inherited Merlin about 7 years ago when he was perhaps a year old and he just changed our lives; I know how nuts that must sound, but it's true. He is the most loving creature I have ever known. Merlin is my #1 studio cat; the minute he hears the door, that cat will come running from whatever he is doing simply to go to the studio with me. Gil loves the studio too, but Merlin insists on his own chair, really he tries to take whatever chair I happen to be using, he is quite a pig and loves laying behind me on the chair. Since he is so big, it means I am frequently perched on just the very edge of a chair. Plus he likes to meditate. No joke, I call him and tell him I am going to meditate and he comes and sits with me until I am finished. He is an amazing animal, "otherworldly" per my friend Karyl. And all three of them are "Catdogs" per my friend Beth. Bottom line, we (at least me, I am not sure John feels so strongly) are obsessed with these animals.

So imagine my dismay when I walk into the house (upon our return from Cincinnati) to find cat shit on the oriental rug in the dining room. I immediately checked the litter boxes to see if they were overly full which they were not. I assumed that perhaps they had been too full at some point during our absence and one of the cats acted out. So I cleaned everything up and truly didn't think any more about it.

But today it happened again. I was so stunned I called for John. We both stared at this new, obviously "fresh" pile, once again on the oriental rug in the dining room. I was furious. But anyone who has owned cats knows that getting mad doesn't really help, you can't actually "yell" at a cat effectively. So instead we stood there and discussed it, analyzing the size of the turds and discussing which cat might be responsible for this brazen act. We decided it must not be Merlin because the turds were simply too small and, truth be known, he is probably our favorite, so we would both look for any way to defend him. We don't think it is Gil either (or at least I don't think it's Gil) as he doesn't have an attitude that would cause him to act out like that. But Izzy, well, that's another story. She's a calico for one thing and they are not that smart. Plus she is full of attitude. For instance, if we are gone for too long, she will stop greeting the cat sitter; she simply gets pissed off that we haven't returned and doesn't care who is feeding her and won't take the time to greet them. She really was meowing a lot tonite sitting next to John on the couch and meowing her ass off. It seemed like she seriously wanted something so he got the brush and spent some time brushing her, found some knots and got them all worked out so she looked nice and glossy. She then lay down on the floor and appeared to be very content. Perhaps she just wanted attention. Perhaps it wasn't even her. Who knows, I just hope it doesn't happen again.
Posted by MB Shaw at 9:18 PM