I felt the whole thing

I am writing this in the car, as John drives home. Naturally I had big plans to document the trip as I went along rather than trying to recall details after the fact. Hmmm, best laid plans. It is so hard to explain what's it's like when I am back in Cincinnati. Basically every single minute is filled and I have very little time to myself. To say there's a lot going on is an understatement. In retrospect I feel like we managed a decent balance among friends and family; hopefully we left each person satisfied they had spent at least some quality time with us. I know that I feel good about the trip. Except I will need to go into Detox, having consumed way too much food and drink these past few days. The Usual Suspects - Skyline chili and LaRosa's pizza. My mom says I only come home for the food. 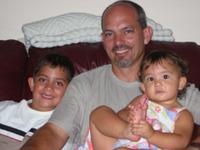 Chris (my brother) and his wife hosted a get together on Friday night with my parents, 2 cousins, their families and my aunt. There are suddenly lots of little ones running around and that is fun. For years it seemed no one in the family was breeding but they have gone wild lately, especially my cousin Brian who has 4 children under the age of 4. It is crazy, but in a good way and the new twin baby boys are simply adorable. I got to hold both of them. The one named after my youngest brother Bradley seems a little cuter to me, probably cause he has more hair, unlike my brother at this stage in his life. It is very strange to hold a baby named after another family member. I can't quite bring myself to say his (the baby's) name out loud as it feels really weird and I noticed no one else in my immediate family was able to say his name either. We kept calling him "the one with hair." I also got a big kick out of my niece Cassandra. She is 18 months old and a total charmer, hilarious to be around. She and Curtis (age 8) are our god-children; they are adorable and perfect.

So anyway, before everyone else arrived, John mixed Cecilia(s-i-l) and I some drinks. Nice frothy Pina Coladas from a mix that Cecilia had. It wasn't until the next morning we realized there was NO alcohol in them which is a mean and rotten trick that John will hopefully never repeat (and yes honey, if you are reading, I know it wasn't intentional). Cecilia quipped, "No wonder I was feeling the whole thing."

That kind of summed up the night for me too. At one point, between my dad, my brother and my cousins, I was reminded that Ohio decided the last election. Yikes there were some scary ideas being bandied about and I left the room rather than bite my tongue off or get into some animated debate(or rant) with people who have already made up their minds. It is so strange how we were raised by the same parents in the same home yet my brother and I seem to have come from different planets. I have already told him that, if he dies (God forbid) I will raise his children in a more liberal environment.

Saturday was the wedding and it was very nice. I don't recall ever seeing a bride and groom who appeared so genuinely happy - both radiating pure unadulterated happiness. Also the first wedding I've been to with a coffee bar. Karl was reveling in his role as Father of the Bride and Lois could win an award as step mom of the year - she was supportive in every way imaginable. I know that Ali was so grateful for her assistance and organizational ability.

The reception was fun too. Lately I've been thinking about dancing and wishing I knew how to dance, I mean really dance without having to be drunk first and without fear of embarrassing myself. A couple weeks ago I asked John if we could take lessons. Actually I would probably need to take lessons on my own first as I am such a very poor dancer that I wouldn't want to subject John to my beginning efforts. But hope springs eternal so I gave it a run last night. Tried not to lead and I was better in that regard but I did step on his toes a number of times, ugh. My dress turned out great by the way and here's a pic for those of you who asked.
Posted by MB Shaw at 9:26 PM