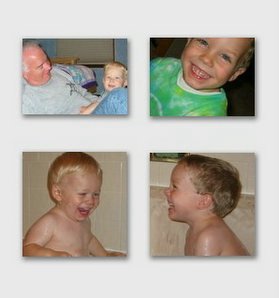 We are watching the grandkids tonight. They arrived late this afternoon and are now in bed fast alseep. Which is where I am going to be shortly as they have worn my butt out. You can see from the faces we have been having a good time.

Aidan is singing now. He is quite good with the lyrics, of Little Bunny Foo Foo; very accurate pronunciation, especially when he gets to the word "goon" which for some reason sounds hilarious to me coming out of the mouth of a 3-1/2 year old. He can also spell his name and can count to 33. Naturally I think he is brilliant. We spent time making art like we usually do. He loves to draw, fish of course, that is what he always draws. Lots of sharks that are accurate depictions; he knows which variety and can point out their dorsal fins. He drew a Moray Eel and identified it properly. I was cutting out his drawings and running them through my Xyron machine to make them into stickers. I showed him how to use the Xyron, let him turn the handle. He thinks this is all very cool.

Ian is a total cut up. The kid climbs like nothing I have ever seen which means we have to watch him like a hawk. He is also talking a lot and quite communicative although we don't know what he is saying much of the time but he somehow manages to convey whatever he needs perfectly. And he knows every word we are saying, I am convinced of it. He picks up books and then does this adorable little babble thing like he is reading out loud. When I am sitting on the floor (which is most of the time) he walks up, turns around and literally"backs" into my lap. He smashed his finger and instead of crying made a smooching sound with his lips and held it up so John could kiss it then he was fine. Melts my heart.

Too bad they aren't cute.
I am perhaps just a little biased.