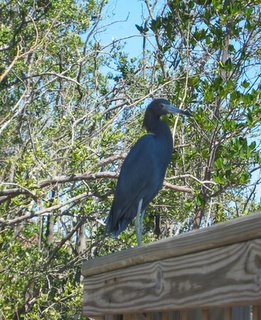 This is my new friend. Let's call him Francis. He hangs out in the wetland area near the pool. I was sketching over there the other day (yes, I actually pulled out a sketchbook!) and he kept coming closer and closer. I took about thirty pictures of him, a la fashion photographer. I wasn't able to draw him cause he kept moving so much. He is a very curious guy and seems remarkably tame.

The weather has been so darn cold here, record breaking in fact. Which totally sucks. I mean crap, it has been warmer AT HOME than it is here. It is balmy today though and I am hoping we will get to the pool or beach. I had a pedicure yesterday so my toes are ready for their debut.

Continuing in our exploration of country music, we saw Walk the Line the other night and WOW what a great movie. I was honestly surprised at how much I enjoyed it. Prior to the movie, I knew very little about Johnny and June, except for a few performances I had seen on TV when I was a child. Joaquim Phoenix IS Johnny Cash though, at least it seemed that way to me. An amazing and inspired performance. I bought the soundtrack for John as a Valentine's gift. That is code for I got it for me, especially since I opened it and listened to it in the car before I gave it to him. I also bought some chocolate hearts that John claimed he gave them to me for Valentine's. We have an easy marriage that way.

We are headed to Miami Beach today. The sun is shining and it is gorgeous.