My friend (I hope it's ok to call her this even though we have never met) Deb Trotter posted something that prompted me to tell this story. http://www.cowboyssweetheart.typepad.com/
Her blog is filled with funny observations, cowgirl sensibilities and yes, terrific art to boot. So check it out. But first, the story.....

Many years ago when I was a budding artist.....no, slash that, it was before I was budding.....more like a wannabee budding artist. I was simply playing around. Taking some art classes at UC Berkeley, doing art every day for the first time in my life and reveling in idealism and discovery.

I had this opportunity to enter a Box show at a gallery out in Pt. Reyes. This was a gallery I used to frequent; my friend Michelle lives in West Marin and we would drive out to Pt. Reyes for lunch, hanging out, hiking, etc. Anyway, they had a Box show every year where local artists were all given a box to paint, decorate, embellish. The boxes were then placed in a silent auction to raise money for some good cause that I cannot recall. A bunch of us decided to do it and somehow we snared boxes. Our efforts were thrown in among boxes by the "real" artists - names I recognized and respected. You see, in those days I couldn't even call myself an artist without stumbling over the word, muttering it under my breath or some such thing. I didn't feel worthy of the distinction.

To say I ruminated over my box minimizes my obsession. I just didn't know which way to go. Should I make a "pretty" box? What about the every popular nature theme? Or even go the functional route? I was in way over my head. Ultimately I just let loose and the muse took over.

First I covered it with green reptilian-like paper. I painted the inside and made these holographic stars that I glued on the walls. I embedded finger hooks in the side walls, beckoning fingers, kind of like follow me sort of fingers. I strung beads and looped them around each finger, entwisting them with a little bling. And then, the pièce de résistance.....my skeleton head. He is perched on top of a spring so he bobbles about wildly. I put a crucifix necklace on him, red of course. And then completed his look with a black cowboy hat. I encased the entire outside of the box with Caution tape that said:
"Caution: Buried Sewer Line Below"

Perfection. I was so proud. It was exactly as I had hoped. I named it What lies beneath. 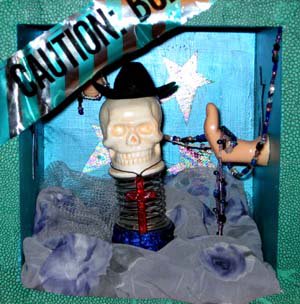 To me it had deep meaning that was obvious.
All that glitters is not gold....temptation is at every corner....latent (or NOT) religious stuff.....split personalities.....good vs. evil.....in my own head I was saying so very many things.
What lies beneath.

But no one else seemed to get it. I could tell by the way their eyes would sort of dart about nervously as they gazed on my creation. Like what the hell is this all about. Thinking to themselves, ah, Mary Beth really needs to get back into therapy.

I loved this box.

But ultimately I became fearful that no one would bid on it and I would be publicly humiliated.

So I did what any self respecting artist would do. I had my husband enter a bid under an assumed name using his work address and phone number. He surreptitiously (at least I think) entered the minimum $25. During the opening I literally stalked my box, waiting to see if anyone would increase his offer.

But John won the box. Which is why it is still in my possession today. I displayed it in my studio for years but lately it has been relegated to the top of the closet. I got it out today to photograph and I am bringing it into the studio again. There are a lot of lessons in this box and I think I was meant to keep it for that reason.

That skeleton head is no longer mocking me. I think he gets it too.
Posted by MB Shaw at 10:49 AM